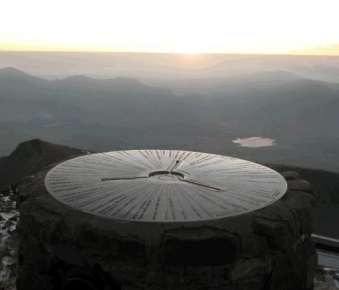 The trig point at the summit of Yr Wyddfa marks the start of the 14peaks traverse for most people. While Snowdon is without doubt a tourist mountain (each year around half a million people go to the summit) one of the great features of the traverse is that you are likely to be there at dawn and there will be few other people about.

The easiest way to the summit (train excepted) is the PYG track. It's 5 kilometres (3 miles) with 800 metres of ascent. You should allow around two hours of steady walking time to get there from Pen Y Pass.

One alternative is to bivvy at the summit but this involves more (and highly unwelcome) weight unless you can persuade your backup team to carry a tent and then take it back down the hill after cooking you an early breakfast! You get to watch the dusk (pictured) and then skip past your team in your lightweight gear.

10,000 years ago Yr Wyddfa was very heavily glaciated, resulting in cwms facing south and west as well as north and east, unusual in Snowdonia, with ice-honed aretes radiating in all directions which make for wonderfully scenic walks and scrambles.

The summit used to be crowned by a bronze –age burial cairn, that of the giant Rhita slain by a young Arthur in one story, before it was levelled in the 19th century to make way for the first hotel. On its north side is the Trinity face beloved by winter climbers, and lower down are the orange spoil heaps of the copper mines that were worked sporadically if not very profitably for over a hundred years.